Skip to content
We are located at the intersection of Highways 24 & 82 between the towns of Buena Vista and Leadville at the turnoff to Aspen. The Win Mar Cabins were built in the 1950’s. Six of our cabins were constructed on the property. The remaining four were moved here from the edge of Twin Lakes when the dam was being constructed in the early 70’s. Our cabins are rustic, yet clean and cozy with all the conveniences of home – fully equipped kitchens, hot showers, and fresh linens.


Cool Temperatures at 9100 feet above sea level make for a comfortable visit! 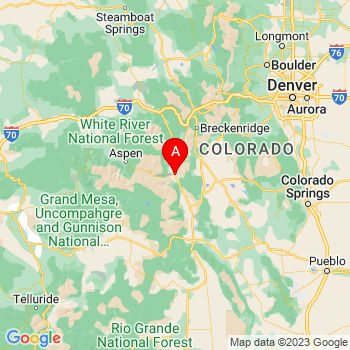 The Winmar Cabins were built in the 1950’s in Balltown, Colorado. The site is a former placer gold claim, one of several in the immediate area.  Six of our cabins were constructed on the property. The remaining four were moved here from the edge of Twin Lakes when the dam was being constructed in the early 70’s.

Ball Town was originally called Lake Creek Station by the Denver & Rio Grande. Trains stopped to let passengers off for the trip to Twin Lakes. A wooden sign suspended between two poles read “Twin Lakes” and originally marked the location. William H. Ball and his wife worked a placer claim and lived near there. When travelers became stranded at the station, the Balls took them in as guests. Eventually, they constructed guest cabins, and Mrs. Ball served fresh trout dinners. A hack provided service between the resort hotels at Twin lakes and Ball Town. A round trip cost $3, relatively high for a time when a day’s wages could be far less. There are guest cabins at the site today, and the tradition established a century ago continues…

Twin Lakes Colorado was originally settled and named “Dayton, Colorado” in 1865. It became an important transportation town, with a name change (Twin Lakes) when gold was discovered in the Aspen area in 1879. The need to move goods and people between the boom towns of Leadville and Aspen drove the development of an old trail over Independence Pass, a narrow rough toll road. The splendor of the valley has been enjoyed through out the years. Twin Lakes was described in 1885 as “the most charming summer mountain resort in Colorado.” 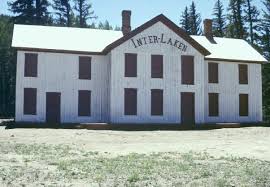 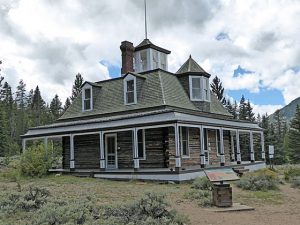 In 1879 a hotel was built on the south shore of Twin Lakes; in 1883 it was purchased by James V Dexter and renamed Inter-Laken.

The Interlaken Hotel and Resort sported deluxe accommodations with views of the lakes. It also had a log tavern, pool hall, and outbuildings including a 16-stall horse barn to accommodate guests’ horses with a tack room, storage, and hay loft. The resort also had a milk barn, an ice house, granaries, and laundry.  One notable building you can still see today is the six-sided ‘privy’ with a separate room and door for each of the six stalls.

Summer concerts were held in the pavilion and, in winter, guests could enjoy the resort, starting with a horse-drawn sleigh ride across the frozen lake.  Hunting, fishing and boating were the favorite activities for the rich and famous visitors who could access the area on the Denver &Rio Grande railroad which stopped at nearby Granite and also a Twin Lakes Station along the Arkansas River.

The resort operated a short 25 years before being abandoned. Now on the historic register, Interlaken’s buildings were moved inland in 1962 when a dam was built at Twin Lakes to augment the area’s water-storage capabilities. The resulting Twin Lakes reservoir was set to engulf the historic buildings. Now you can hike or take a boat tour over to Interlaken, walk around and explore the ghost resort. Dexter House can also be toured inside, thanks to renovation work done by volunteers working for the US Forest Service.

Your 5-Day Forecast at a Glance